I’ve seen a lovely variety of wildlife in the last fortnight, so I’ll just have to pick out the best ones for now. Beginning with some moth trapping in my hometown of big old London City, albeit actually in the suburbs. There were some beautiful individuals caught, one of which I’d been hoping to catch for a while – the Brimstone Moth.

Isn’t it fab? To me, it is one of the best examples of how moths can be cool and not brown / dull / boring as most people think. Take this description: a delicate insect with large fluttering yellow wings. Many would think of a butterfly – a Clouded Yellow perhaps? But I was just trying to describe the moth. Like I said, moths can be as cool and as pretty as butterflies. I’d even go so far to say that perhaps they’re even cooler.

Moving on from moths to another group of beautiful insects – damselflies. On a riverside walk in Surrey (oh yeh, I went to Surrey after London), I came across a whole cloud of them and could see that there were four different patterns on the damselflies. With this prompt, I found my notes and did some identification. It turned out that the cloud consisted of two species – Banded Demoiselle and Beautiful Demoiselle, with the males and females of both.

Back in Portland (Dorset), I was having a nice week. Albeit that the weather was a bit grim and I couldn’t put out the moth trap which is always a shame. On a mixed weather day, someone brought a moth into the centre which naturally cheered me up. It was the first of the species that I’ve seen in a Dorset – a Cream-spot Tiger Moth. However, I had actually seen this species before but in larvae form (i.e. caterpillar) all the way back in March! 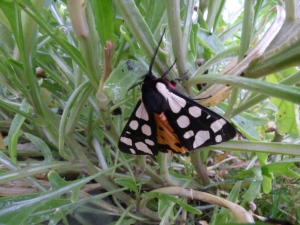 Away from the insects and into the birding world. And not just birding … this week saw me edge into the somewhat more nerdy side of birdwatching – twitching! This is when someone travels a distance to see a particular bird and to add it to their list. For me, this was my first proper twitch, I normally just enjoy watching birds.

I decided to go for this twitch because 1) it was less than an hour away, 2) it was a bird that is very rarely seen in the UK and 3) it was an awesome bird – an eagle! More specifically a Short-toed Snake Eagle who is usually found in southwest Europe and western Europe up to the Gulf of Finland / northwest Africa / central Asia. According to ARKive, the western populations are migratory, so perhaps this is one that got blown off-course? 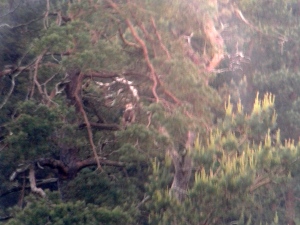 I took an awful blurry photo by taking a photo with my phone through a telescope (known as digiscoping). But thanks to an editing program, I managed to change the lighting a bit so you can actually spot it in the photo. I’d say that I’m not going to turn into a twitcher, but I can’t promise anything, there may be another cool bird that is worth travelling to see!