This weekend has been one of those really great couple of days, there’s been fantastic wildlife, half-decent weather and some lovely people (and dogs). I spent it working up at Gilfach – the visitor centre is opened up at the weekends when the salmon are leaping so that people can warm themselves up after watching out for them. On either side of manning the centre, I went down to the viewing platform to see if I could see the salmon myself, and I did indeed! There were some impressive leaps, it’s really quite spectacular. I only got one photo, it is really blurry!

Watching the salmon is quite funny, there’s a little bit of a trick to it. You need to be really patient – they’re typical wildlife in that they make you wait around a bit. And since it’s mid-November, it’s important to layer up so that you don’t get cold. Then it’s a case of just watching the falls. I find myself getting quite mesmerized, going into a bit of a trance. Normally, I’m in the middle of daydreaming, when suddenly a salmon leaps and I get startled, almost like I’ve forgotten why I was there!

I commented to someone there, that it is a bit like cheering on someone in a race, because you’re going “oooh, go on, you can do it!!”, but they don’t always make it and sometimes end up being washed downstream again. I honestly don’t know how they do it, the water is really flowing fast down the River Marteg, crashing down over and between the rocks. It’s not quite loud enough to drown out your thoughts, but it isn’t far off!

My commute in this morning was intriguing, it felt a bit like the valley was on fire – the trees were yellow / orange / red in colour, and the mist was down across valleys. The photo below is at Gilfach, when the mist has lifted a bit, and the trees aren’t so bright, but you get the gist. Whilst driving through the reserve, I also saw a Green Woodpecker which was fantastic. I’ve seen Greater Spotted Woodpecker, but I’m not sure if I’ve actually seen a Green before. But now I can definitely say I have!

With spending two days in a row at the reserve, I was not going to miss the chance to put my moth trap out! I put out the work one, which has a MV (Mercury Vapour) bulb (i.e. really bright). I wasn’t expecting too much, it was a bit chilly overnight and it’s quite late in the season. I was thinking maybe between 5-10 individuals, from maybe 2 or 3 species. Boy was I surprised when I open up my moth trap, it was one of my highest catches for individuals. Better yet, there were 4 new species for me – December Moth (P.populi), Winter Moth (O.brumata), Red-green Carpet (C.siterata) and Scarce Umber (A.aurantiaria).

Even more exciting, the number of December moths was really rather extraordinary! I counted at least 61 individuals, and talking to a few moth-ers, anecdotal records seems to be that only a few are caught usually. So 61 does seem pretty amazing! I’m hoping to get in touch with Butterfly Conservation and find out what the highest amount of these moths caught in one night is, maybe I have a new record (unlikely, exciting stuff like that doesn’t happen for me!). 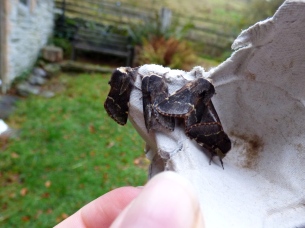 A group of four chilling out

These two having a natter 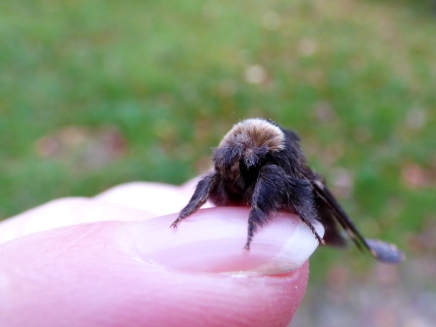 Look at its fluffy legs!! 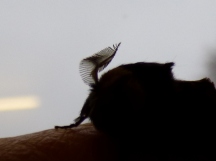 Look at how feathery its antenna is!

Are these two having sex?!

Talking of species, I’m thinking of becoming a pan-species lister. This involves keeping a record of EVERY species that I see in the UK (there are a few rules, but it’s not strict and people can pick and choose which ones they follow). I’m probably quite low in numbers currently, because I’ve not been keeping exact records for most things (particularly botanical!), so I will probably have seen more than my total will add up to.

3 thoughts on “A Weekend of Firsts”