Everything is beginning to calm down and sort itself out in my life, which is wonderful and also means that I may just have some time to write my blog again! Fingers crossed! There is a lot I could write about in this post, but I am going to focus on a nature walk I took recently – the first in ages and it was wonderful! 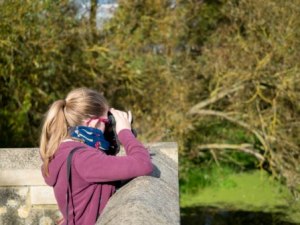 I managed to find quite a few plump and juicy blackberries to snack on, although we are beginning to near the end of their season sadly. We even found a dragonfly – which I believe to be a Common Darter (Sympetrum striolatum) though I am completely out of practice, so do let me know if I’m wrong! We watched it for a minute or two, and I tried to get a decent photo of it. I think I did quite well, though not an amazing photo. It then flew off and we didn’t see where it landed, until we went to walk on again at which point my friend noticed that it had landed on my hair! It actually stayed there for about 5 minutes or so, and only flew off when I went to carry on walking. On an unrelated note – how fantastic does my plait look in the photos?! 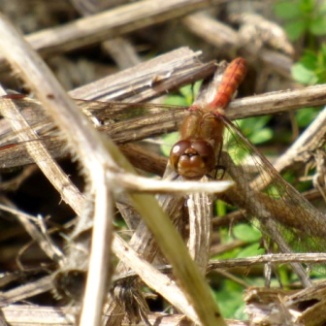 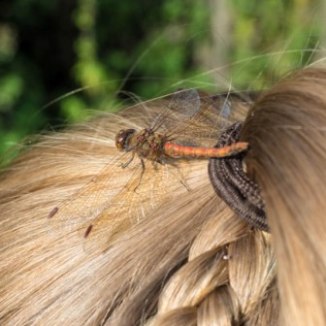 Further along the way, we were intrigued by the sight of a lady crouching down in the grass by the side of the path. What could she be up to? Something nefarious or was she, like I usually do, looking at something interesting? It turned out that she was photographing Shaggy Ink Caps (Coprinus comatus), a lovely fungus that it is one of the easier species to identify. Apparently it is edible and quite tasty, but before the black ink begins to appear. I wouldn’t take my word for it though, as I don’t know much about foraging for mushrooms!

What with there being lakes at this nature reserve, there were a fair few birds about – Grey Heron (Ardea cinerea), Lapwing (Vanellus vanellus), Black-headed Gull (Chroicocephalus ridibundus), Mallard (Anas platyrhynchos), etc etc. I had my duck identification skills tested, after quite a few months of not even attempting any duck ID. Racking my brains, I managed to remember that they were Wigeon (Anas penelope) and Teal (Anas crecca). It shouldn’t have been quite so difficult to remember, but I am very out of practice with ducks! Must work harder! 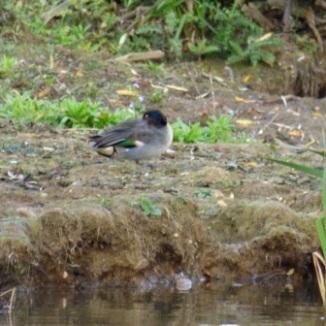 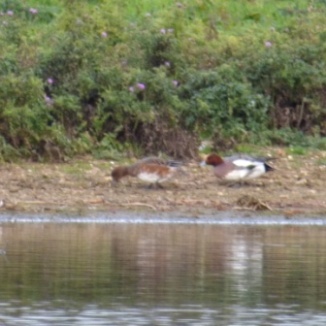 We almost passed by this female Blackbird (Turdus merula) without noticing her, she was sitting ever so still and quietly in the Hawthorn (Crataegus monogyna) tree. A little later, we spotted another Blackbird, this time a male who was not so still but instead was enjoying some haw berries.

Our last find was a good one – a grasshopper! I had wondered if it would be too late in the year or too chilly to find any Orthoptera, but I was not to be disappointed it seems. With the side keels of the pronotum being so straight and almost parallel, my guess would be Lesser Marsh Grasshopper (Chorthippus albomarginatus)?

All in all, a rather nice nature walk. I bet it is even better in late spring and summer when I am sure it is buzzing with even more Orthoptera, and filled with exciting wildflowers and other insects!

In other news, I have left National Trust’s Wimpole Estate (though not before finding a rare fungus!), moved house, and have exciting plans for the near future. Watch this space! For now, a few tweets of what else has been happening recently:

Big fan of the wildlife-themed cushions at @johnlewisretail pic.twitter.com/ebB31SKWzS

Kudos to @StephLandymore & @KHolmie for setting up Ldn Nature Network, & 1st of hopefully many meet-ups! Looks like less ppl than there are pic.twitter.com/VzxVeIkDte

For those wondering how Mowgli is managing with the move, whilst she spends time hiding beneath bed, she has also been playing & sunbathing pic.twitter.com/H3KQ3kBWBk

I haven’t managed to write a blog post for three months now, which is just crazy. Due to a combination of being incredibly busy at work, very busy with A Focus On Nature work and some not-so-great stuff happening in my personal life, I haven’t had the time to write. And when I have, the latter has meant that I am not feeling particularly inspired either.

I hope that everything will calm down and sort itself out soon, and that I can return to writing. If so, it is likely that posts will be sporadic for a while before I manage to make a regular posts again. Until then, you can see what I have been up to in the past few months below (most recent first). I haven’t managed to include anywhere near everything I have been up to, but it will give you a flavour of how busy I have been!

Lizards!! Inc a selfie with the baby lizard because it's a baby lizard!!!! ❤ pic.twitter.com/1wNpxr8GM2

The four speakers at the #Stateofnature launch. First 3 all called on @andrealeadsom & UK gov to take real action pic.twitter.com/gRuLaaC56e

As wildlife mad as I am, this is the 1st time to report that lst night I was kept awake by a caterpillar. #teammoth pic.twitter.com/VXwuPkcNU7

Unexpected handling of a fledgling swallow today when it landed on a visitor's hat, which was still on his head! pic.twitter.com/lj2GpDq62l

We love our new header photo – taken at #Birdfair this year. The group grows every year! pic.twitter.com/7yZabZwE0h

Nice to bump into an entomologist at Wicken who started showing me beetles in the cow dung. Fascinating stuff pic.twitter.com/z2KfgPF7Gv

It has been rather warm today, so I got the schoolchildren to build me a shelter so I could have some shade pic.twitter.com/C6ojhFb9WK