This was meant to be published in early October but my internet connection wasn’t good enough for upload photos, so here it is now.

Oh the frustrations of finding dwarf mongoose in the bush. To start off, they are pretty small – less than 30cm in length! Add to this, that they are a lovely brown colour that happens to blend in quite well with wood and the ground. In addition, they can be very quiet. I’ve been with a group before and they have gone silent, leading me to believe that they have moved but actually they’re just being quiet. So when you’re looking for them, that’s no help.

It’s easiest to look for them in the morning and just before sunset, as they will either at or near their sleeping refuges. At these times of day, it is a case of making the rounds within their territory and hoping you catch them before they leave (in the morning) or go to sleep (in the evening). This usually works, but occasionally the group will be using a refuge that we don’t know of, so the theory falls down there.

A mongoose up in a tree!

During the day, it gets a bit more difficult as you have got to walk throughout their territory calling for them. Yes, we call out to them and we actually call “Mongoose”! It sounds a little bizarre, but they’re habituated to come to that call and receive a little bit of food for it. Some groups are great, they’ll respond to your call with enthusiasm. I have had one group come running to me from almost 50 metres away. On the other hand, I have been right next to a group and been completely ignored by them.

So you still have to rely on your eyes and ears for any tell-tale signs of mongoose presence. The slightest rustling can get me suddenly veering off my path and calling hopefully for mongoose. I say hopefully because it is usually a couple of birds that I’m scaring off. They do make small contact calls to each other, but you usually can’t hear them unless you are fairly close.

As for seeing them? Almost no chance unless they’re moving between foraging spots or in an obvious sentinel position. Take these photos below, can you spot the mongoose? To myself, the mongoose in the first photo is very obvious, and in the second photo, still quite noticeable. But usually, they’re hidden amongst the rocks or branches and it’s a bit more of a challenge. 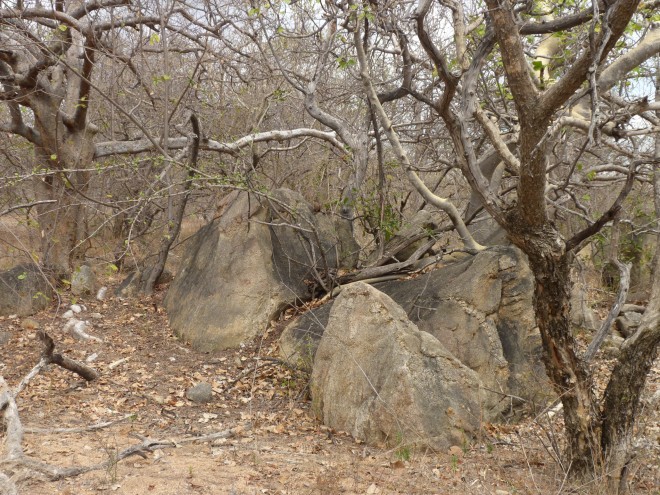 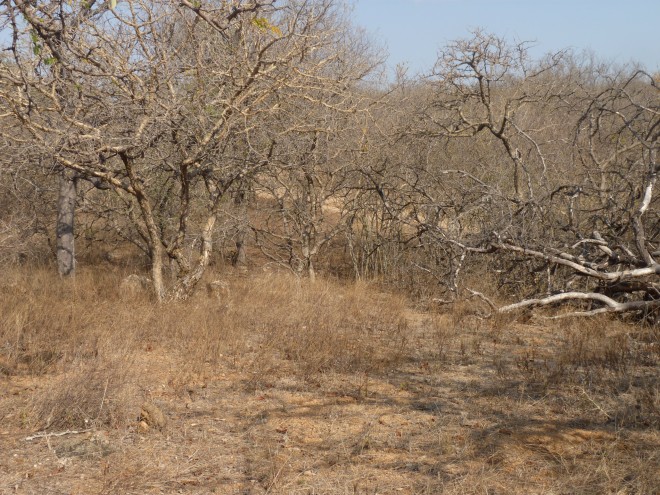 Due to the recent increases in temperature, the middle of day is now quite hot and as a result, the mongoose flake out in the shade for a few hours and we head back to the house. During one of these midday breaks, I got a good view of the local troop of baboons as they cavorted on our back lawn. One of the larger males even came and sat himself on the stoep (patio-type area), no more than 5m from me – although I was inside and hiding behind my curtain. When I moved and took a photo he freaked out and ran off. 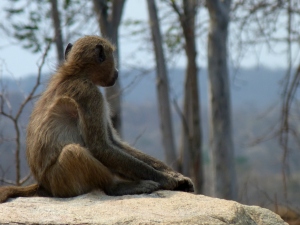 Not the big male, but a nice photo of one of the others

Not long after, I heard a noise from the other side of the house and moving to investigate, I found another part of the troop, including the cutest little youngster who was exploring various things by chewing them – twigs, grass, even his own foot at one point! 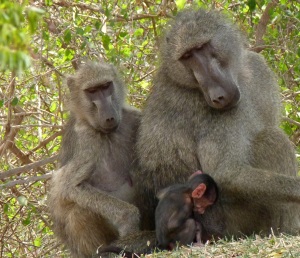 My favourite photo of the baboon family

A number of reptiles are present both in and around the house. Before I came out here, there were apparently some baby Mozambique Spitting Cobras in the grass outside my bedroom. Nyala and Kudu both have skinks in their room, whilst Kudu also found a tiny gecko. We recently found another gecko in the kitchen, which moved into my room a few hours later. Despite flicking through a reptiles book, we couldn’t identify it. If you know what it might be, we would be very interested to find out! 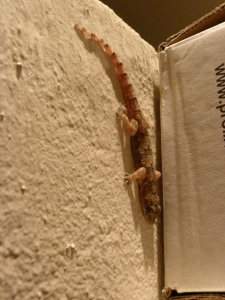 Talking of things I’m interested in, I found a pretty awesome moth the other day. A Walker’s Owl Moth which can have a wingspan of 12cm! I put it in a box and into the fridge to reduce its activity (standard practice for restless moths), which the others were somewhat bemused by. But it worked, as I managed to get a decent photo of it for identification. 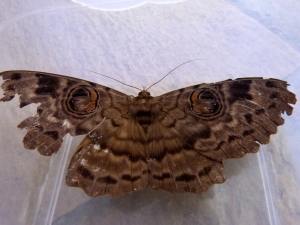 We’ve seen kudu and bushbuck down at the riverbank, vervet monkeys scrambling around the trees and across the lawn, and waterbuck grazing on the lawn. Hippo have also been heard on the lawn at night (slightly unnerving when you’re just dropping off to sleep). So even being at home can be exciting for wildlife … and it helps when that home is in South Africa!