Having been visited by my parents, packed up my belongings in Dorset, finished my job, had a mad couple of days getting my car fixed, and finally moved house, I have finally got to the end of a very hectic couple of weeks. Despite being so busy, I have still managed to get out and about to see some wildlife!

A great start to week at the Chesil Beach Centre. Despite getting confused by Sophie’s directions to the Starry Smooth-Hound shark (Mustelus asterias) as I thought she meant the other bridge, I had a lovely wander looking at crabs and picking up litter. I also spotted my first Brent Geese (Branta bernicla) of the autumn, though they were pretending to be interior design (flying ducks anyone?). 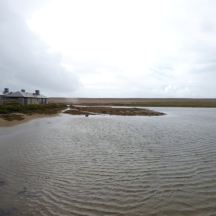 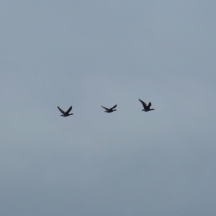 I swapped locations and spent a few days at Lorton Meadows, managing to spot two Roe Deer (Capreolus capreolus) from the office! They can often be seen grazing in the play / picnic / pond area. Whilst a bit cautious, they spent a fair bit of time there before disappearing into other fields. 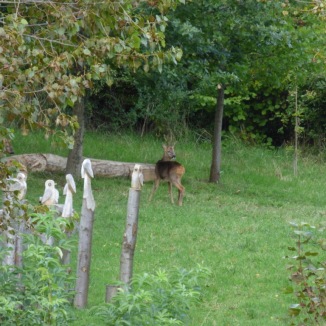 A new experience for me when our wildlife camera person came to check that the Barn Owl (Tyto alba) box and camera were still in good condition (they are), and I got to go up into the loft. Ignoring the anxious voice inside me muttering about heights, I went up and looked at the box for the first time – in which we found seven Small Tortoiseshell butterflies (Aglais urticae) hibernating!

As the name suggests, at the end of the week came the weekend! Sadly it was my last full weekend in Dorset but I made the most of it! My parents came down to see me and amongst visiting awesome places, we also went out to local restaurants and watched a sunset over the Fleet. Our first location of awesomeness was RSPB Arne Nature Reserve in the Purbeck area of Dorset. I have been meaning to visit for ages and despite a touch of chill in the day, it was fantastic – dragonflies, birds, fungi, deer and more!

The weekend wasn’t over yet though! Oh no, we also went to watch Motor X on Weymouth Beach followed by a visit to Portland Castle! Naturally, I was most interested in seeing what wildlife was about, but I did enjoy reading about the castle’s history, using their interpretation and playing (well, winning) a game of Nine Men’s Morris with my dad. The game is basically a big version of Noughts and Crosses, and was good fun to play. I am tempted to make my own set! 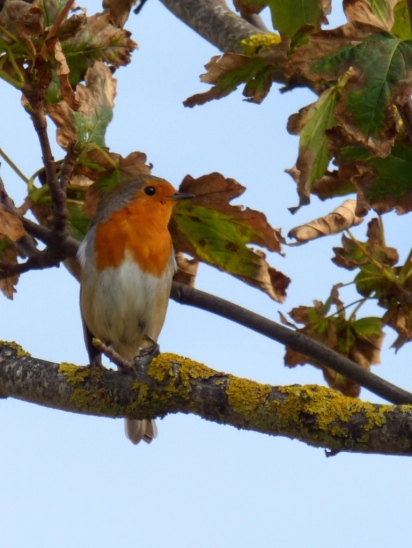 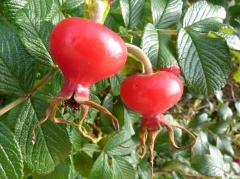 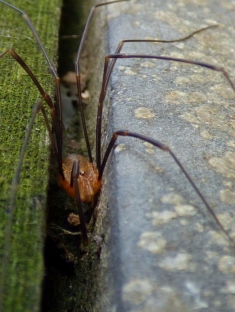 Crossing the bridge to see the rest of the gardens, I found a ladybird wandering around on a bush. The proceeded to find another 100+ ladybirds – some in larvae form, some as pupae and some as adults. I found three different species, but also a couple of different versions of some species. For example, the Ten-Spot Ladybird (Adalia 10-punctata) has a few possible colour variations. Flick through the photos below for the identifications, or you can look at my Twitter thread on them. 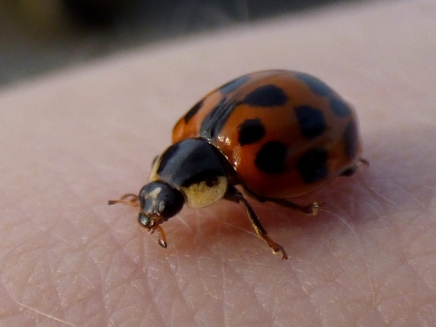 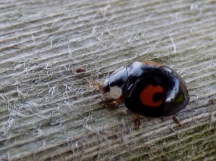 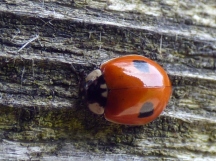 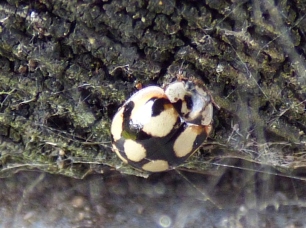 The larvae look like they are quite evil, don’t you think?

I couldn’t let my parents without taking them to Lorton of course! Neither had been before, so a late evening walk across the meadows was perfect. As well as pointing out the birds, we ate blackberries and I showed them oak galls. In the pond area I found an Elephant Hawk-Moth caterpillar (Deilephila elpenor), which was rather small so presumably one of the earlier instars (stages of being a larva). It looks like it is plotting world domination!

And the aforementioned sunset, such beauty to finish off my penultimate week in Dorset. 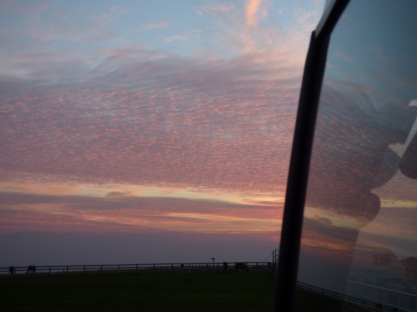 A busy week, as ever! Trying to recover from Birdfair, to get stuff done both at work and outside. At Lorton, I had a woodland wander as I took some children searching for beetles. Typically, we also found some other cool stuff to be fascinated by: a tiny delicate mushroom in the middle of the path, a few different types of harvestman and LOTs of slugs, snails and worms! 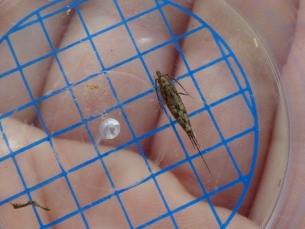 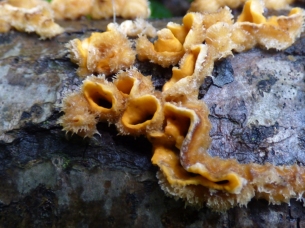 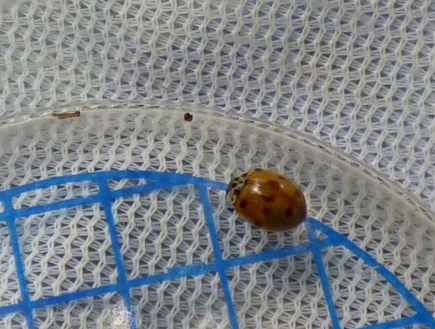 Later in the week, I went on a meadow meander to find a Wasp Spider (Argiope bruennichi). Sadly, the one that I’ve photographed a lot recently was no longer in place. I think maybe the cows wandered through and trashed its web. However, I still managed to find one, and even saw her spinning a grasshopper (I know it is a female as the male Wasp Spider is brown and smaller)! No photos or videos of that sadly as she was too quick for me! But I did get a photo of her beginning to munch on it. The meadow meander turned into a general nature walk (the best kind of walk!), as we examined grasshoppers and crickets, pried open a hatched oak gall (to unexpectedly find an earwig nymph inside!) and I found a new species for me, the Red-legged Shieldbug (Pentatoma rufipes). [PSL: my 12th Hemiptera species]

Also on the walk, I came across this interesting Hymenoptera in a patch of clover. I think I’ve decided it is an ant species (Formicidae), but that is as far as I’ve got! 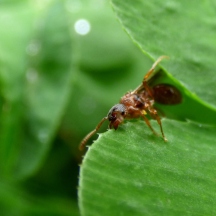 Saturday evening saw a mad dash down to Lodmoor, to scout out the area behind the tip. Why you might ask? Well, a Long-tailed Blue butterfly (Lampides boeticus, apparently also known as the Peablue which is a lovely name!) had been seen there! The weather was atrocious for butterflies, and a not great for me either I might add – I got soaked! However, I still had a hopeful look around. I saw plenty of wildlife (including a couple of butterflies when the weather had a break from pouring water down on Weymouth) – but no Long-tailed Blue! Oh botheration! I consoled myself with blackberries (covered in raindrops as previously mentioned) and taking photos of the other wildlife, including SIX Wasp Spiders, a very obliging Common Blue butterfly (Polyommatus icarus) and a rather wet male Red-tailed Bumblebee (Bombus lapidarius) trying to shelter from the rain. 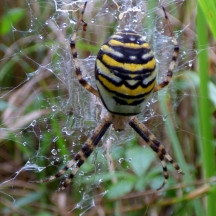 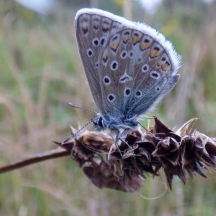 Back at Lorton for Sunday, a rather grey and damp day, though no downpours. I had a bird-themed weekend running which meant one of my favourite activities – owl pellet analysis! I.e. lets take apart some solidified owl vomit to look at the bones of small mammals. Sounds grim, but it one of the best things to do I think. You end up finding some fantastic things and learning a lot about anatomy at the same time.

The end of my (working) week had a thrilling conclusion when a visitor asked me about a caterpillar they had seen. My interest was piqued, I do so love Lepidoptera and their caterpillars. I went out, armed with a caterpillars book and my camera. Turns out I didn’t need the former as I knew straight away what species it was. I have seen plenty of photos of this species on Facebook and Twitter, but never seen one as a caterpillar in the wild myself. Until today! The wonderful and beautiful Elephant Hawk-Moth (Deilephila elpenor), pink and green as an adult (PINK and GREEN!!), brown, smooth and seemingly with many eyes as a caterpillar (the eyes are to scare off predators!). Look how awesome it is!! 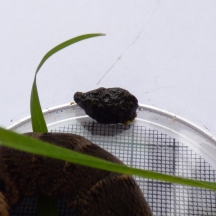 Heading back to the centre (my mid-afternoon snack was waiting for me after, mm chocolate cake), I yelled out “Caterpillar alert!” as I almost stepped on another caterpillar. Slightly smaller, and with many more hairs, I could tell what this one was straight away as well, the Fox Moth (Macrothylacia rubi) caterpillar!

The postings on this site are my own and don’t necessarily represent Dorset Wildlife Trust’s positions, strategies or opinions (or any other organisation or individuals for that matter).